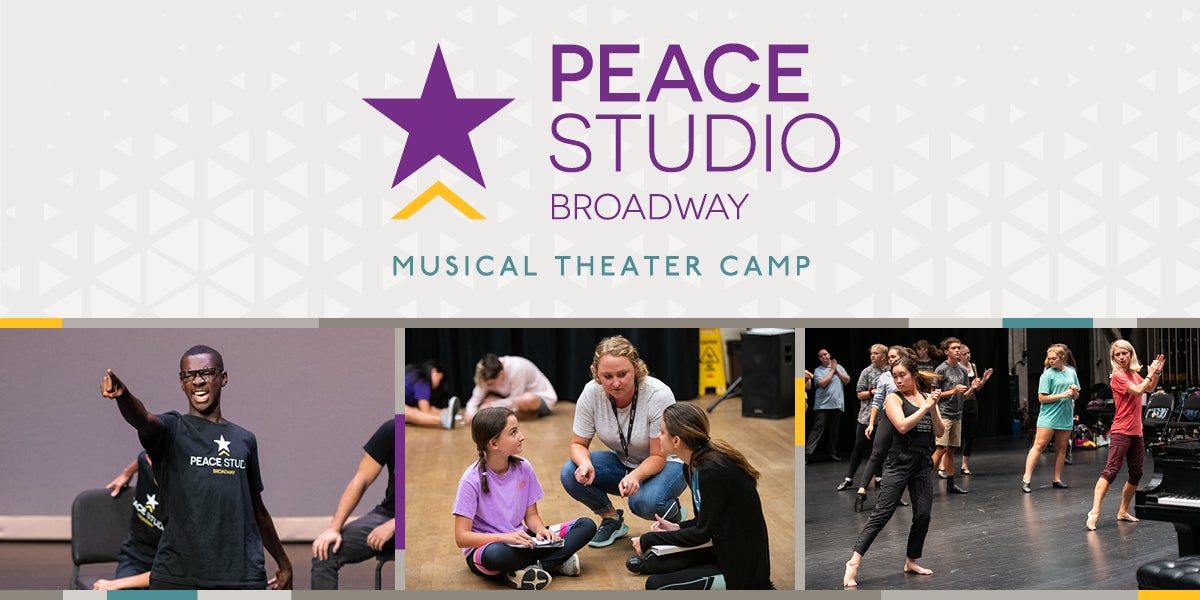 Peace Studio: Broadway – a two-week musical theater summer camp – returns! This robust program brings together top musical theater educators to give teens with a passion for singing, dancing, and acting a crash course into the theater process, PLUS the opportunity to perform on stage. Week One • July 20-24 • 9 am – 4:30 pm Students will dive into the fundamentals of musical theater through interactive classes in acting, singing, and dancing taught by Jonathan Flom, Henry Lewers, and Stacy Alley. Days will consist of workshops in stage presence, movement, improv, vocal technique, musical theater history, audition coaching, and more. Week Two • July 27-31 • 9 am – 4:30 pm Time to put the skills learned in week one to work! Budding artists will work on bringing to life personalized selections from the best of Broadway, past and present. Showcase • July 31, 4 pm Family and friends are invited to watch their rising star in a final showcase that is free and open to the public.

Artistic Director: Jonathan Flom Jonathan Flom is the president of the Musical Theatre Educators Alliance. In Flom’s time as head of Musical Theatre at Shenandoah Conservatory, he developed curricula to prepare students for the contemporary business of theater. He created and taught an entrepreneurial course entitled "Preparation for the Theatre Profession," and championed the inclusion of pop/rock singing, the Meisner acting technique, and on-camera work. He is the author of Get the Callback: The Art of Auditioning for Musical Theatre and Act Like It's Your Business: Branding and Marketing Strategies for Actors. Music Director: Henry Lewers Henry Lewers is a music director, pianist, and educator, currently serving on the musical theatre faculty at the University of Alabama, where he teaches courses in musicianship and musical theatre history and is the vocal coach/music director for the department. Prior to his appointment at UA, he was associate conductor on the national tours of Bullets Over Broadway and Memphis, and music assistant for the Broadway production of Aladdin. Henry has also worked as a music director at the Forestburgh Playhouse (NY), and served on the musical theatre faculty at the Kentucky Center’s Governor’s School for the Arts. Dance Director: Stacy Alley Stacy Alley is head of Musical Theatre and an associate professor of musical theatre/dance at the University of Alabama. Alley is a professional director and choreographer whose recent teaching and/or artistic credits include work in Denmark, Tanzania, Norway, Scotland, and Chile. She has been performing professionally for over 30 years, including five years as a featured dancer in Radio City Music Hall’s Christmas Spectacular. She is the Musical Theatre Educators Alliance vice president and a member of the Stage Directors and Choreographers Society (SDC). Return to the Peace Studio: Broadway schedule.

In the afternoon, polish your audition materials (monologues and/or songs) in personal coaching sessions with Jonathan Flom, president of the Musical Theatre Educators Alliance and head of the new Musical Theatre BFA concentration at Slippery Rock University. Parents are highly encouraged to attend the morning information session from 9-11 am.

Registration is Now Open
Call the Box Office at 864.467.3000 to register.
A limited number of scholarships are available for families with financial need. To apply for a scholarship, please contact education@peacecenter.org.
$950 Includes: All courses and personalized coaching for two weeks, and a camp t-shirt. Payment plans are available and must be paid in full by June 15, 2020. Please contact the Box Office at 864.467.3000.