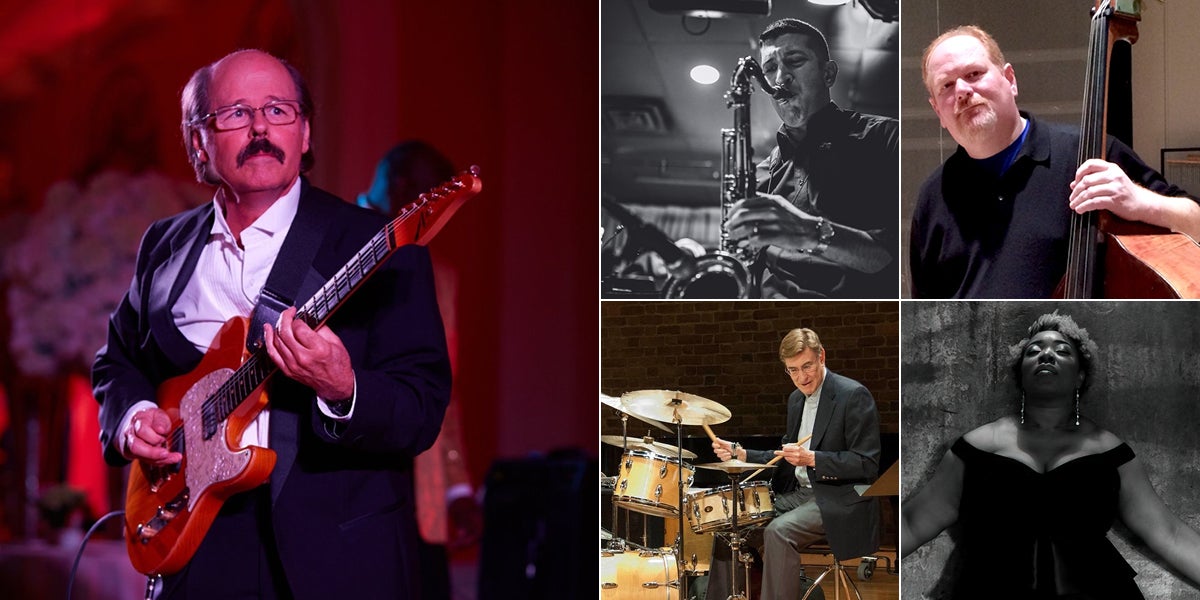 Please note: Face masks are required and may only be removed when seated at your table.

Watson’s career spans the decades serving as a member of The Bruce Hornsby Band and a studio guitarist in Los Angeles playing for television, movies, and records. Watson has recorded four albums since 2011 including his most recent in 2018, Reflections. His vast experience as a musician has allowed him to guide future generations. He served as an adjunct professor at The University of Southern California and a lecturer at The University of Miami. Watson is currently the Director of Jazz Studies at The Fine Arts Center, an art magnet high school in Greenville. Popat is an accomplished saxophonist and music educator. In 2001, Popat won a Downbeat Magazine Award as a member of the UM Monk-Mingus Ensemble. CD credits include “An Evening with Saturday” with the Garrett Lynch Quartet and a live 2-CD set with Vee’s Olim Jazz Trio. He has performed and recorded with a range of professional jazz big bands and a host of jazz greats. A dedicated music educator, Popat has served in the award-winning arts programs of the Randolph Township Schools (Randolph, NJ) and as Middle School Principal in the West Essex Regional School District (North Caldwell, NJ). Popat is proud to serve as the current Director of the Fine Arts Center – South Carolina’s first public high school for the Creating, Performing, and Visual Arts. Alewine has performed bass with the Grammy-nominated University of North Texas 1 O’Clock Lab Band and is a former member of the United States Air Force Band. He has performed with jazz luminaries such as Dizzy Gillespie and Dave Brubeck and has served on the music faculty at the University of South Carolina, Clemson University, University of North Carolina-Asheville, University of South Carolina-Upstate and Southern Wesleyan University. Alewine is currently the Instructor of Bass and Commercial Music at Anderson University. Dilling has performed with such jazz legends as Clark Terry, Herb Ellis, Ernie Watts, Phil Woods, Houston Persons, Tony Monaco, the Jimmy Dorsey Orchestra, the Nelson Riddle Orchestra, and has shared the stage with drummer Louis Bellson. As a freelance player, Dilling performs with some of the region’s top jazz artists and is the drummer for the Asheville Jazz Orchestra, The Michael Jefry Stevens Trio, The Richard Sulman Group, The Todd Wright Quartet, and The Wendy Jones Quartet. He also leads his own dynamic big band, Time Check, that pays tribute to the music of Buddy Rich. Dilling has been on the jazz faculty at Appalachian State for 38 years teaching drum set studies. Wright is a celebrated jazz singer who spent three years as the principal vocalist at Opera Ebony. The Seneca native began singing at the age of five and continued her musical journey through college where she majored in opera studies at the North Carolina School for the Performing Arts. Influenced by Leontyne Price and Aretha Franklin, Wright’s musical styling’s have been described as confident, versatile, and deeply soulful. Most recently, you will find her performing with her namesake band, Jamie Wright Band, or working on her current project, “Aretha Franklin Tribute Band.”